Some thoughts about life 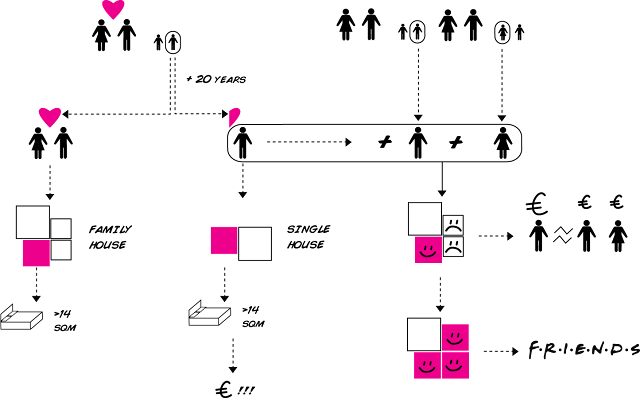 Lately I am questioning myself about what's my aim in life. It's not just a matter of carrier perspective but widely about life assessments.
I am almost entering into my 30s and this makes me a bit anxious mostly because I am single.
I had 3 long relationships since I was 17, one after the other one so I was expecting to settle down as soon as I was able to, but now there's not any more this aim. It might happen one day, but it's not necessary. I am not going to get crazy if it doesn't happen, I am already kind of crazy because I chose the architecture career.

But let's think about relationship in architectural therms.

The different status of private life can be translated into a dwelling typology.
If you are married, you should live into a single family house or a flat. A dwelling which has at least two bedrooms and one of them is a master bedroom.
If you are single you would like to live in a studio: open space or one bedroom apartment.
This last category can afford a single flat only if their salary is high enough. Due to nowadays crisis status, it's quite hard to be able to afford a single dwelling on your own, especially if you are living in a big city.
Actually the matter is slightly different from what we could expect. Indeed it is not the size of the city to determine the price of the dwelling but the demand of people looking for a single life space. This is much more common into dense populated environments and international ones, where up to me the individual needs appear to be much stronger than the collective ones.
The single living unit is the dream of every young single human being, but unfortunately is not affordable for all of them.
Sharing a flat is the obvious counterpart of this story. But let's think now at the typology of houses these unlucky youngsters are dealing with.
There is not much to think about: many young people together can rent a flat or a house, yes but one which is meant to be inhabited by a family.
So what are the consequences of this? The luckiest one or the one, who decides to rise his own rate on the rent, gets the master bedroom, the others the children rooms.
More and more young professionals are delaying the age of marriage or maybe they will never marry at all, thinking that the friends-life is the assessment of an eternal youth.
Is it time then to arrange something for those friends living together under the same roof from the architect point of view!

That was just the theme of the latest competition we attended at A&G!
We have been selected to design a 75 meters tall tower in the north of Amsterdam, just behind the Shell tower. They asked us to design 70 sq m flats with 2 master bedroom (>14 sq m) and a living room.
The main issue was to provide an image of how the tower will look like. So I was involved basically in the 3d modeling of the different options. I produced something like 50 different tipology, whit crazy balconies in the A&G style. It was a nice experience but unfortunately they didn't choose our proposal, despite they like our presentation.
We did a research about the needs of young people, interviewing the young employees in our building and many of them provided interesting ideas and solutions about the arranging of the interior in order to be able to have a good balance between common and individual spaces.
The public areas of the tower should be like playground for grown-ups. People has to enjoy those spaces and use them in a recreational way: basket courts, ping pong tables, skate podiums, rooms for performances or rehearsals .
The balcony should be generous and allow even the growth of vegetables, thus a wind shield is necessary. We design the shielding system into the façade profiles and the balconies are sticking out in opposite corners in every floor.

The main façade is dynamic as the geometrical tension between the new Eye museum and the Shell tower. I was also imagining to apply random spots of bright colours into the loggia sides in order to perceive the possibility to customize the architecture with your own colour or pattern, but maybe I was going too far :P
How not to mention the amazing view on the city you can get from your living room, the warmth colour of the city lights, the reflection of the water from the several canals into the city and most of it the breathtaking constantly-in- movement Dutch sky as background. 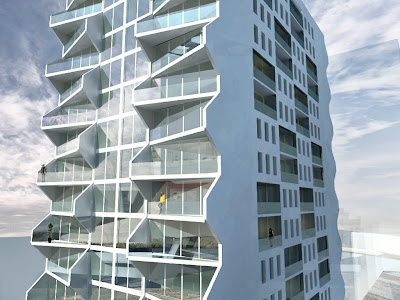 In conclusion I have to say I love the Friends typology flat and I will move in it as soon as possible if I can!
Labels: graphics projects writings