People meet in architecture but sometimes it doesn't happen

"Briskly walking, direct to my destination, always the same for years, I walk along a way that leads you through a square. My field of vision is much wider. I get the sun on my face and it warms me. My pace slows, my gaze runs on the architectural façades and settles down on the scenes that take place in the square. The old lady feeding the pigeons, children chasing them, the elders who pass on the bike searching of friendly faces. My thoughts constantly evolving alternate relentlessly in my head. What will I do? What should I do? Actions to plan, choices to make. Who am I, where am I going and why? I could bet that the thoughts that crowd my mind, populated with the same insistence on the minds of those who pass me by. Happiness, anger, despair, boredom, these are the feelings that revolve around me. The square is a place that catalyzes the emotions. They come alive, grow and die here. The squares with their spatial interrupt the flow of consciousness of people. When you bump into a colleague or a neighbour, you stop and exchange a few words to interact with the other human being while your eyes alight on details of architecture. A place of the soul which is made of solid stone walls. On blocks of white stone, you can sit, think and contemplate. You can feel cold or heat on the skin. So you can imagine that this place exists." 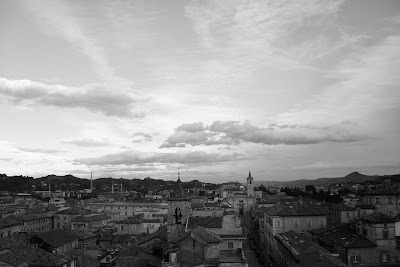 ... but sometimes it doesn't happen

"I woke up late, as every day, and at 11 a.m. I went to Andrea's home. When I arrived the lift didn't work, so I had to climb stairs for seven floors! When I reached the seventh floor, I was breathless. I rang the bell..no one came. I rang it again. No signs of life from the inside of the house. I thought Andrea had gone to do shopping and he was arriving in few time. So I decided to wait for him in front of his door, sitting on a step while I was listening Radiohead. My doubts and my concerns were growing up. I took my mobile phone and I tried to call him. You can guess that his mobile phone was switched off. I tried to call him again restlessly, another four or five times. No signs of life. I came forth of the building. I walked around it, looking for him, looking for his standing-at-sight green coat. I looked for him near the shops he usually goes. Nobody wore that green coat. My concerns grew up, becoming huge. I was attacked by anxiety. What did it happen to him? I came back to the building. I was standing in the little square in front of his building and I could see his opened window. So I said to me:”I'm sure he's inside”. I boarded the elevator to the seventh floor, I rang the bell. Again, again. Nobody came. I begun to punch the door with all my strength ( which is very little, I suppose) while I was shouting his name: “Andrea!”. I approached my ear to the door to hear some noise come from the apartment. No noise. I became nervous and scared. I came forth again. I looked the open window again. I sent to him a text and I went to the square. One hour had passed. I reached the square, that one I described in my essay. It was like my essay would become real. I felt my heart full of those feelings. Despair, because I was thinking something bad had been happened to Andrea. Anxiety, because I couldn't bear that waiting. Anger, because a part of me had been thinking that probably he was inside the house, but he couldn't hear me. All those feelings were appearing in my face. I threw glances at the shops windows and I could see my worried face. I crossed the square. On the opposite side there was a church. I decided to enter there, thinking I could find some peace. I got into the church, I made the sing of cross with holy water. Immediately a priest said, speaking into a microphone: “The faithful are asked to leave, the church is closing”. I almost said a swear word. Nobody let me come in! I came forth the church and I went into a bookshop. Browsing through some books I managed to calm down. I decided to give the last try. This time Andrea opened the door. He said: “At this time do you get here?”. I glanced him with a crazy face. Then I told him everything. He said he was wearing headphones, that's why he couldn't hear me. He was also sure that his mobile phone was switched on. I begun to cry to give vent to my despair. Andrea was very sorry for what had just happened to me. He made me crazy. I think to have reached  the bottom of my madness, all in one hour and half."
Labels: writings